Roka Furadada has joined the Barcelona Science Park’s community. The startup has developed a new generation of smart solar ingredients that adapt to the level of ultraviolet radiation to prevent diseases associated with sun exposure, while being less toxic to both humans and ecosystems. With 3 patent families in 44 countries around the world, the company has just launched its first product to market using this disruptive technology, which is destined to revolutionise the sector.

Roka Furadada was established in 2019 by scientist and entrepreneur Judit Camargo with the mission to reduce cases of skin cancer and other diseases related to ultraviolet radiation (UV), through research, development, production and commercialisation of active ingredients for therapeutic and cosmetic use that are highly effective yet have a low toxicological and environmental impact.

Specialising in biomedical research applied to public health, Camargo has more than 20 years of experience in the chemistry and pharmaceutical sectors, both in R&D and international business development. In 2019, spurred on by her entrepreneurial spirit, she decided to go one step further and start up her own business project based on smart solar ingredients.

“It was the natural next step. The project covered all my interests because I think prevention is very important in terms of health. It’s how to prevent the spread of skin diseases, especially some cancers. Plus, it is a field with an amazing future. Between 65% and 85% of all skin cancers are tied to sun exposure, yet the field of sunscreens hasn’t had a truly disruptive innovation in the past two decades. Plus, I’ve always been interested in reusing waste, especially natural ones. The future lies in developing natural cosmetic ingredients that help promote the circular economy,” the entrepreneur explains.

And the company name reflects what identifies it most: promoting a shift to a more sustainable, fair economic model that connects the health of people and ecosystems: “I chose the name Roka Furadada because in Torredembarra, where I spent the summers, there was a rock at the beach with a hole in it called Roca Foradada. The name took me back to those days at the beach and what I wanted to accomplish: setting up a company focused on developing products to protect against the sun’s rays while helping preserve the environment. It was perfect! Unfortunately, the rock isn’t there any more, it was removed to expand the port…”

For its activity, Roka Furadada has two laboratories: one at the UAB Research Park, where the R&D department carries out organic synthesis to develop new active ingredients, and another at the Barcelona Science Park, focused on formulating new applications. “With this new laboratory at the Park, we’re expanding our cosmetic applications department. Even though our main business is selling cosmetic ingredients to manufacturers of final products in a B2B model, this new laboratory will be key for researching new applications and commercialisation of ingredients. The Park provides a space that is easily accessible, with services that, as a start-up, aren’t always within our reach, plus connections with other companies,” explains Judit. 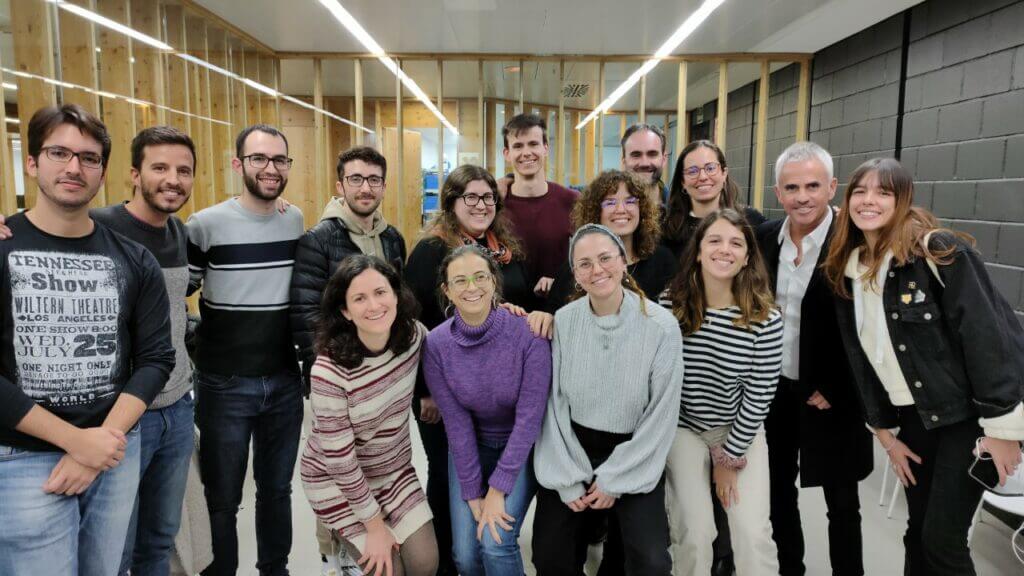 Members of the startup team in a training day (Photo: Roka Furadada).

Roka Furadada has developed a new generation of smart photochemical precursors, which are activated by ultraviolet radiation (UV) thanks to the company’s patented ROKA Smart UV® technology.

When exposed to the sun, mimicking what plants and other living organisms do, the compounds with this technology “wake up” and provide personalised, on-demand protection based on the amount of UV radiation the user is exposed to: they protect against harmful levels while also allowing users to reap the health benefits that come from low doses, such as stimulating the immune system.

“The big innovation in these new organic molecules is that they are photoadaptive. The precursors absorb radiation from the sun, transforming into new molecules that protect the user. This only happens when they are activated, which means the protection lasts longer than current filters,” explains the founder of Roka Furadada.

Another unique aspect of these molecules is that they result in formulations that are less toxic to humans and more eco-friendly, especially for marine ecosystems. This is possible thanks to an innovative encapsulation technology, which the start-up has also patented, that means some of these active ingredients are inside a silica capsule, attached to its structure (unlike conventional encapsulation) covalently, the strongest chemical bond. This technique cuts down the amount of UV filter released into ecosystems by 99%.

The Roka Furadada technology is protected under 3 patent families in 44 countries around the world. Currently, the start-up is exploring use in other cosmetic and therapeutic applications, as well as photoprotection materials for industry, automotive, aeronautics, etc.

Jump into the market

This September, at the Cosmetorium trade show, Roka Furadada presented the first photoadaptive solar active ingredient based on its patented technology:  ROKA Smart UV® PvB 360. It is a photochemical precursor designed to strengthen protection against the UV spectrum that is activated by wavelengths between 290 and 320 nanometres and gives rise to a molecule with high protection against the UVA range (320-400 nanometres).

With PvB 360, the company hopes to revolutionise the sunscreen market, but is also working to commercialise this ‘smart molecule’ for skin and hair care. “We’ll start sales worldwide in early 2023 with the goal of expanding internationally in 2024. The first formulations with ROKA Smart UV® PvB 360 will be available next summer,” reveals Camargo.

The launch of its first project will consolidate the Roka Furadada project, which so far has raised €1.7 million in private investment and over €5 million in public funding, including the EIC Accelerator (€1.8 million grant + €1.5 million equity) from the European Commission.

This year, the company won the DeepTech Award for most disruptive technological innovation in Spain and Portugal, part of the XV anniversary of the Start-Up AwardsXXI, granted jointly by Enisa and CaixaBank.

Judit Camargo also won the global ‘Women in Tech Start-Up Award’ granted by Women in Tech, recognising the commercial potential of Roka Furadada and its impressive track record of growth and innovation.