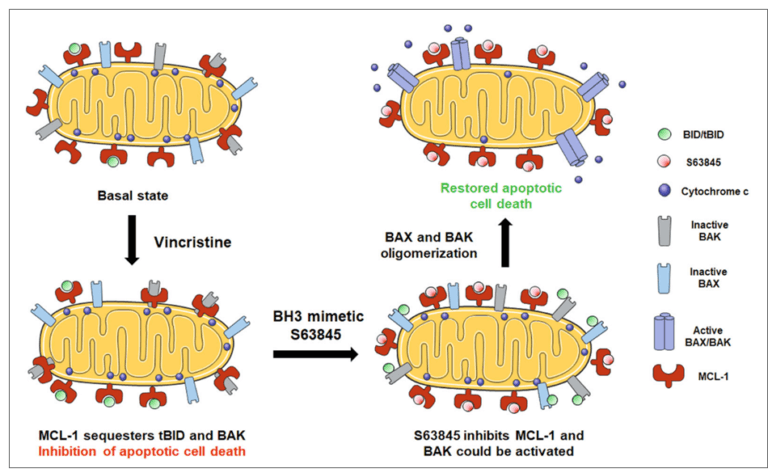 Use of S63845 inhibidor to overcome resistance to vincristine in Rhabdomiosarcoma cancer cells
25.09.2020

A study led by IBEC researchers from the Nanobioengineering group, uses a functional predictive biomarker to anticipate the effect of treatments against rhabdomyosarcoma, the most common soft-tissue cancer affecting childhood and adolescence.

Rhabdomyosarcoma (RMS) is a highly malignant cancer that typically develops from skeletal muscle cells and can arise in different parts of the body. It is most frequent in children, accounting for 5% of all pediatric tumors. Current treatments for RMS include chemotherapy, radiation, and surgery. However, the survival rates for high-risk patients have not improved in the past decades, and refractory/relapsed patients present a bad prognosis as their response to current treatments is often insufficient to avoid cancer development.

Now, IBEC researchers Clara Alcon, Albert Manzano, Josep Samitier and Joan Montero, from the Nanobioengineering group, together with researchers from VHIR, IDIBELL and IRSJD institutes, associated to hospitals, published in Cell Death & Disease, a journal from Nature publishing group, a work that finds a novel effective sequential combination of drugs for this disease. The chemotherapeutic agent vincristine, currently used to treat RMS, with the BH3 mimetic S63845 was effective both in vitro and in vivo against RMS. This strategy increases the efficacy of current treatments while decreasing therapy-induced toxicity.

Therapy causes cancer cells’ death mostly by apoptosis, a process controlled by the BCL-2 family of proteins. However, evasion of apoptosis is a hallmark of human cancers, and it is often promoted by an increase of anti-apoptotic BCL-2 family proteins expression. Targeting anti-apoptotic proteins represents a promising therapeutic approach to treat high-risk or relapsed RMS patients. In this regard, a novel class of therapeutics that precisely inhibit BCL-2 anti-apoptotic proteins, the so-called BH3 mimetics, could be used to overcome treatment resistance. This approach has a great therapeutic potential but the main challenge is to effectively guide the use of BH3 mimetics in the clinic.

To solve this issue, in this recent work researchers from IBEC have utilized dynamic BH3 profiling (DBP)- a novel functional predictive biomarker – to identify anti-apoptotic adaptations upon treatment. Using this technology, the authors could determine sensitivity to BH3 mimetics, and overcome RMS resistance to chemotherapy. Specifically, they found that the MCL-1 inhibitor S63845 synergistically enhance the effect of vincristine, one of the most clinically used drugs to treat RMS both in vitro and in vivo.

In this study researchers have investigated the use of BH3 mimetics to boost RMS sensitivity to current chemotherapy. They identified anti-apoptotic adaptations to common therapies such as vincristine and doxorubicin and tested them in combination with BH3 mimetics to achieve a high cytotoxicity, around 80%, while decreasing ten-fold their concentration, thus their potential secondary effects in the clinic.

The authors found three new combinations of currently used drugs to treat RMS (that induce apoptosis) with specific anti-apoptotic inhibitors, that killed cancer cells without affecting non-tumoral. In addition, those combinations when applied sequentially acted synergistically, which allowed a dose reduction. This is a key aspect of the work, as secondary effects derived from chemotherapy administration in children are severe and may include infertility, cardiomyopathy, or the appearance of other cancers. By using this new methodology, the timing and dosage of drug administration can be optimized to reduce those undesired side effects.

This strategy was validated in vivo using a RMS patient-derived xenograft model, where some cells from a patient’s tumor were implanted and expanded in mice. This technique provides more material to be used in the laboratory and is advantageous in pre-clinical research as they recapitulate patients’ therapeutic response. The authors observed a reduction in tumor growth after the sequential combination of vincristine and MCL-1 inhibitor S63845 identified in vitro compared to single agents’ treatment.