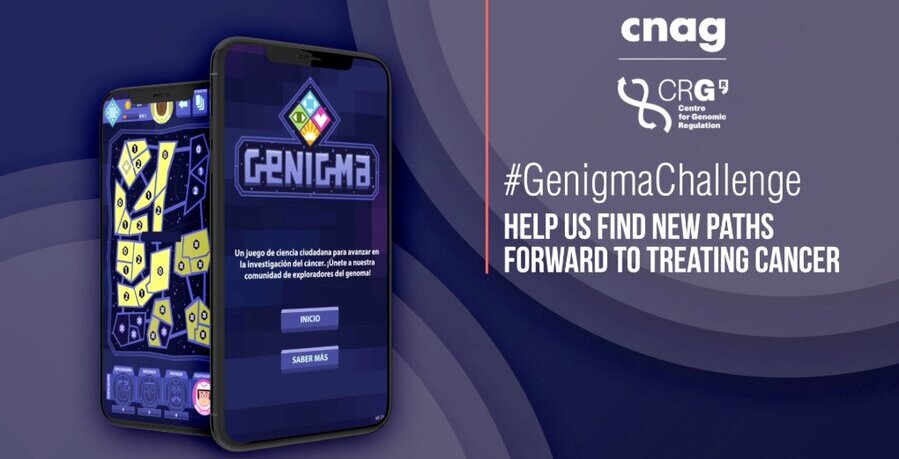 CNAG and CRG launch the #GenigmaChallenge, a citizen science initiative

CNAG and CRG launch the #GenigmaChallenge, a citizen science initiative

Researchers at the Centro Nacional de Análisis Genómico (CNAG-CRG) -located at the Barcelona Science Park- the Centre for Genomic Regulation (CRG) and game professionals, launch Genigma, a videogame that enlists players to solve puzzles while generating real-world scientific data that can detect alterations in genomic sequences and ultimately advance breast cancer research. The game, out on iOS and Android and available in English, Spanish, Catalan and Italian and is the result of a two-and-a-half-year long citizen science project.

Genigma – developed by a team of researchers at CNAG-CRG and CRG with game professionals from Jocs al Segon and X-Lives, was created to boost worldwide research efforts that depend on cancer cell lines, a critical resource used by scientists to study cancer and test new drugs to treat the disease. One of the limitations of cancer cell lines is a lack of high-resolution genome reference maps, which are necessary to help researchers interpret their scientific results, for example pinpointing the location of genes of therapeutic interest or potential mutation sites.

“Cell lines are responsible for the discovery of vaccines, chemotherapies for cancer or IVF for infertility. This makes them a pillar of modern biology,” explains ICREA Research Professor Marc A. Marti-Renom, with dual affiliation at the CNAG-CRG and CRG and whose research underpins Genigma. “However, the lack of genome reference maps limits current scientific progress. It’s like asking people to navigate modern cities using maps from the past. With the help of other people, we can update these maps, which will allow us to make fast progress in breast cancer research.”

Professor Marti-Renom’s research group has developed methods to create genomic reference maps by visualising the genome in three-dimensional space. However, this requires significant time and resources to train artificial intelligence, as well as vast computational power.

The researchers launched Genigma because they believe that data generated by players could be a more effective method of updating the reference maps compared to using AI alone. The ‘herd intelligence’ of players can also provide creative solutions in ways that AI might not be able to.

To play Genigma,, players have to solve a puzzle involving a string of blocks of different colours and shapes. Each string represents a genetic sequence in the cancer cell line, and how players organise the blocks is a potential solution to the location of genes.

Players have to reorganise the blocks so that they attain the highest-score possible. The higher the number of players and high scores, the higher likelihood that researchers have found the correct sequence for this particular location in the reference map.

“Anyone with a smartphone from anywhere in the world can download Genigma for free and make a direct contribution to research, lending their logic and dexterity to the service of science,” says Elisabetta Broglio, citizen science facilitator at the CRG. “Genigma will analyze the solutions provided by the players as a collective and not as individuals, and will take advantage of creative solutions impossible to find with deterministic algorithms”.

The game launches today with a three-month long campaign – the #GenigmaChallenge. Every week on Monday, for a total period of three months, the Genigma team will introduce new genome fragments from the T-47D cell line to be arranged by players. The first genome fragments needing to be arranged are from chromosome 17, which contain a high number of breast cancer related genes. This includes BRCA1, for which mutations have been associated with about 40% of inherited breast cancer.

Genigma was developed over two and a half years, involving more than 500 people across 13 workshops. The game was conceived and tested by a diverse group of people from different backgrounds, including researchers, students, teachers, artists, medical professionals, bioethicists, journalists, representatives from patient organisations, artists and game developers.

According to Oriol Ripoll, Creative at Jocs al Segon and Coordinator of Genigma’s game design team, “Science can often feel inaccessible for most people, which is why being able to pick up your phone to play Genigma is so exciting. Not only can you combine the universal appeal and popularity of videogames to contribute towards advancing medical research, you will also learn more about science.”

Genigma is funded by ORION, a 4-year project that has received funding from the European Union’s Horizon 2020 research and innovation programme under grant agreement No 741527. This project addresses the Horizon 2020 call for “SwafS-04-2016” under the Science with and for Society Work Programme. Genigmais also a result of a collaboration with the ‘Fondazione ANT Italia Onlus’ and Arima Genomics.