By Azucena Berea14 June 2022No Comments
< Back to news

A study led by researchers from the Institute for Bioengineering of Catalonia (IBEC), based in the Barcelona Science Park, and published in Nature Cell Biology, shows that applying mechanical force to the cell nucleus affects the transport of proteins across the nuclear membrane. In doing so, this controls cellular processes and could play a key role in various diseases, such as cancer. This entails a novel approach to understanding aspects of cancer invasion and metastasis, opening the door to potential new techniques for diagnosis and therapy.

The cells in the body receive mechanical stimuli from their environment and respond accordingly regarding decisions on how and when to grow, move and differentiate. The process is known as mechanotransduction, and it is critically important for the cell function and for human health.

Now, a study led by lecturer Pere Roca-Cusachs, from the Faculty of Medicine and Health Sciences of the University of Barcelona, the Institute of Nanoscience and Nanotechnology of the UB (IN2UB) and IBEC, reveals that the direct application of force to the nucleus can affect the spatial organization of the DNA and the activity of nuclear proteins, among other functions. When cancer cells invade the organs and metastasis appears, these create physical forces that are transmitted to the cell nucleus.

“Nuclear mechanotransduction plays a central role in the spreading of the cancer by regulating the tumour growth, invasion and metastasis. However, the underlying mechanisms are still quite unknown. The main reason is the lack of a technology that allows us to observe what happens inside the cell nucleus when this is subject to a mechanical force”, notes Pere Roca-Cusachs, lecturer at the Department of Biomedicine of the UB and principal researcher at IBEC.

The study describes the recent finding of a nuclear mechanosensing-underlying mechanism, which reveals how the application of physical forces to the nucleus has an impact on the transport of proteins through the nuclear membrane and on the resulting distribution between the cytoplasm and the nucleus.

“It is widely known that mechanical forces affect the gene expression. Our study reveals a mechanism that unveils how this process takes place”, note the principal co-authors Ion Andreu (IBEC) and Ignasi Granero (Faculty of Medicine and Health Sciences and IBEC).

The proteins move from the nucleus to the cytoplasm and vice-versa, through specific structures called nuclear pore complexes (NPC) in two main ways: passive and active diffusion. Passive transport is fast for the small proteins, but it reduces progressively as the molecular weight of the protein increases. The active process of bigger molecules depends on the nuclear transport receptors that interact with these factors by tagging specific sequencings known as nuclear localization signals (NLS), for proteins entering the nucleus, or nuclear export signals (NES), for exiting proteins. 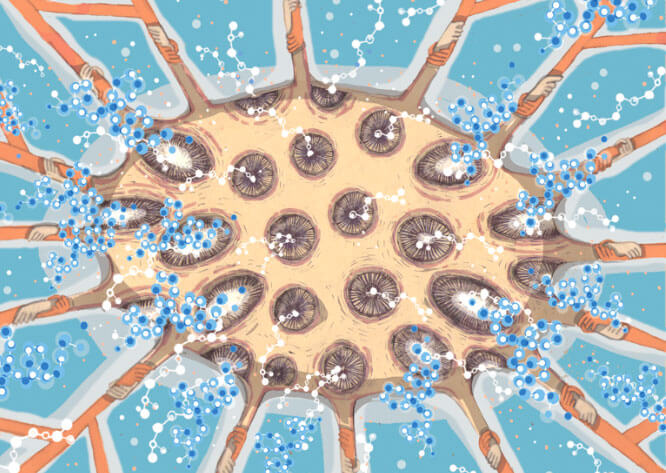 The study reveals that the direct application of force to the nucleus can affect the spatial organization of the DNA and the activity of nuclear proteins, among other functions (Image: IBEC).

The authors found that the application of physical forces to the nucleus improves permeability through the NPC, which increases the transport of molecules. Also, they found that active diffusion increases at a higher scale compared to the passive one. This differential response leads to changes in the transport of molecules through NPC according to the applied force.

As part of the study, the team designed mechanosensitive molecules adjusting the passive diffusion through NPC (changing their molecular weight) and the active transport (placing specific sequencings of NLS or NES). When including a fluorescent marker in these molecules, they generated fluorescent indicators that enter or exit the nucleus as a response to the force.

This study was carried out in collaboration with the group on theoretical modelling led by Barak Raveh (Hebrew University of Jerusalem) and Alberto Elosegui Artola (Francis Crick Institute, United Kindgom).

The therapeutic potential of mechanotransduction

Through the right optimization and combination of these molecules, the groups led by Pere Roca-Cuscahs and Xavier Trepat (Faculty of Medicine and Earth Sciences, IBEC and CIBER of Bioengineering, Biomaterials and Nanomedicine – CIBER-BBN) want to work on light-emission sensors to measure the nuclear mechanotransduction through the monitoring of its nuclear localisation. This study is part of an ambitious project funded by the call of CaixaResearch on Health Research of la Caixa Foundation.