A fascinating journey through research

A fascinating journey through research

The Live Research Fair, now in its 18th year, remains committed to its format presenting a selection of research projects from the leading research centres in Catalonia in various fields to open up science to society, encouraging young people to go into STEM careers and promoting scientific culture. The Fair opened its doors today at CosmoCaixa and will welcome school groups from all over Catalonia through 29 April. On 30 April, it will be open to the public.

The event, organised by the Barcelona Science Park and “la Caixa” Foundation, this year is bringing one hundred researchers and eleven research groups from leading research institutions all over Catalonia to this emblematic space, so participants can join them in experiments related to their current projects, using the same instruments and materials as in their labs.

This format gives school children and the public the opportunity to speak face-to-face with researchers, discover the most innovative research being done in our country today and, in the process, is helping encourage them to go into STEM careers and promote scientific culture. 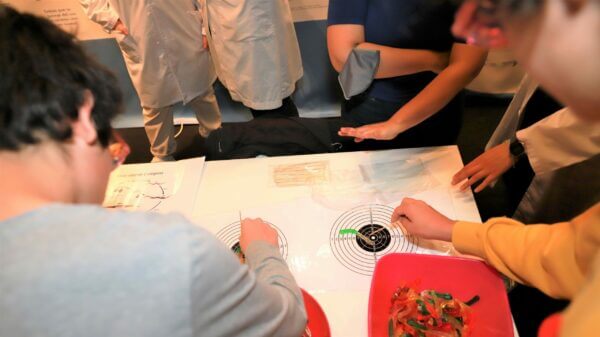 To encourage interaction with the public, each booth has a puzzle to be solved using the scientific method (Photo: Barcelona Science Park).

From quantum physics to the secret language of fruit

People visiting the fair can send encrypted messages using quantum physics, extract stem cells from a piece of fat and turn them into adipocytes, decode the secret language of fruit and vegetables, encapsulate a drug inside a nanoparticle, so it can ‘travel’ to a specific part of the human body, or discover how we resemble a 1-mm transparent worm, among other experiments from the teams at the research centres. To encourage interaction with the public, each booth has a puzzle to be solved using the scientific method. 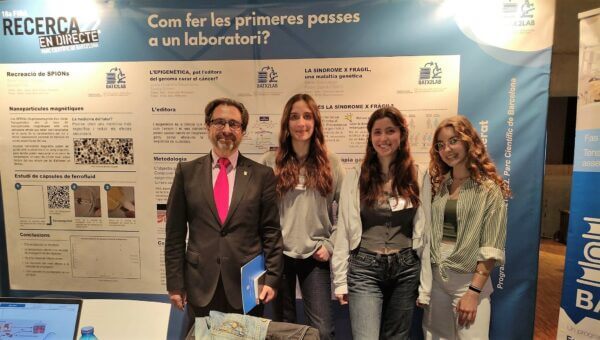 The rector Joan Guàrdia with the winners of the BATX2LAB program (Photo: Barcelona Science Park).

This year the Fair features two activities in addition to the scientific exhibition. In the “It takes 100% of the talent!” space, visitors are challenged to guess, in a memory game, who are the benchmark scientists in each of the fields of research shown, as a way to break down sexist stereotypes and gender roles in science.

On Saturday 30 April, at 11:00 am, the public will also get to watch a funny play, featuring a science monologue by Big Van Ciencia, interacting with the audience to share research with a fun, attractive approach.

The Live Research Fair is part of the Barcelona Science Park Research in Society programme which has over 100 activities with nearly 6,000 participants each year, with support from the Spanish Ministry of Science and Innovation’s Foundation for Science and Technology (FECYT) and the Barcelona City Council.

Rector Joan Guàrdia emphasized the importance of this event for the research system in general and for the University of Barcelona in particular. “At least in three ways: to promote open research as a basic pillar, both to break down the boundaries of knowledge and to continue advancing in the paradigm of citizen science and the democracy of knowledge”, he said, to highlight the central role of the PCB as an emblematic research entity in our country and with a direct impact on the city of Barcelona as a reference space in Europe; and to vindicate, as this event demonstrates, the potential of collaboration between institutions to optimize the talent and tools of the Catalan system “.

In the words of Ignasi Miró, “the essence of CosmoCaixa is the promotion of participation and experimentation by visitors in the different spaces of the museum and also in the collaborative initiatives that are carried out there, like this already established fair in which they can live science in first person, enhancing their curiosity”.

According to Park CEO Maria Terrades, “The Fair, for a few days, brings the lab to the streets, makes science accessible to society and transfers scientific knowledge. These three days are key in encouraging careers in science among our young people, for them to understand that science is alive and can change our lives. The fact that the fair is now in its 18th edition is proof of its success”.

» The Live Research Fair is free of charge for schools on 27, 28 and 29 April, but spots must be booked ahead. On 30 April, it will be open to the public and is included in the ticket to CosmoCaixa.